Zinc is both a component of bone and also involved in many metabolic pathways that could impact bone health. The DRI for zinc is 11 mg for men and 9 mg for women. Vegans typically ingest close to the DRI through food, but there’s a concern that lower zinc absorption from plant foods could interfere with many vegans reaching optimal zinc status.

Studying the relationship between zinc intake and disease is complicated by the fact that zinc comes in high-protein foods and often in conjunction with a number of other minerals. There’s also no easy way to assess zinc status.

The table below shows the zinc levels and intakes of vegans compared to meat-eaters and lacto-ovo-vegetarians in three studies, including from the EPIC-Oxford survey conducted in 2010.

Vegans should make an effort to include foods high in zinc or take a multivitamin or modest zinc supplement. See Daily Needs for recommendations.

Lightowler and Davies (1998) found a urinary iodine concentration (UIC) for vegans in the U.K. well below what’s considered healthy for a population, and the second-lowest average vegan UIC recorded to date. However, there are problems in using UIC to assess the iodine status of vegans (see Urinary Iodine Concentrations of Vegans). Through chemical analysis, Lightowler found baseline iodine intakes from food to be 87 µg/day which, while far short of the RDA of 150 µg/day, approximates the mean daily iodine turnover of ~95 µg/day (Zimmermann, 2012). Dietary iodine is absorbed at a rate of >92% (Zimmermann, 2012), leaving these UK vegans with a slightly lower intake, on average, than required for iodine turnover unless they were taking supplements. Key et al. (1992) found mostly normal thyroid hormone levels among vegan men from the U.K., with the notable exception being vegans who were likely receiving excessive iodine by supplementing with kelp. It’s noteworthy that vegans supplementing with kelp in Key et al. had hypothyroidism rather than hyperthyroidism.

Given that 1) hip and leg fractures played a large role in the higher fracture rate among vegans in EPIC-Oxford, 2) subclinical hypothyroidism is associated with lower BMD in the femur, and 3) U.K. vegans have questionable iodine status, it seems possible that iodine deficiency could contribute to their higher fracture rate. Vegans should make sure they have a reliable source of iodine (see Daily Needs).

In EPIC-Oxford, a follow-up survey sent to participants an average of 14.3 years after recruitment, found that a high percentage of vegetarians weren’t meeting the estimated average requirement (EAR) for selenium (Sobiecki, 2016). 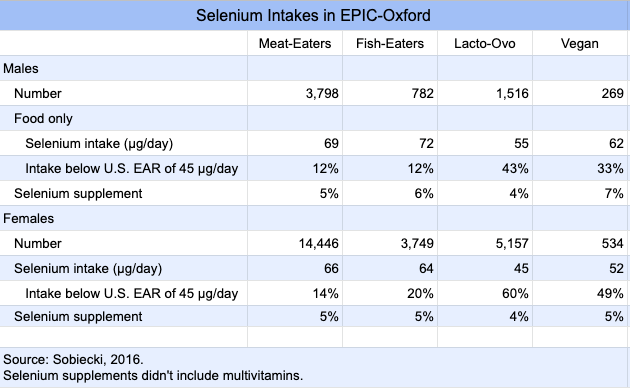 A cross-sectional study from Germany comparing 36 sex and age-matched omnivores and vegans found no significant difference between median plasma selenium levels: 77 µg/l vs. 68 µg/l, respectively (Weikert, 2020). However, there was a significant difference in selenoprotein P levels which are more indicative of selenium status (omnivores: 5.0 mg/l; vegans: 3.3 mg/l). No reference range was provided and selenium intakes weren’t measured.

In comparing the German vegans in Weikert et al. to the quintiles of women with higher bone mineral density in Hoeg et al., the vegans would have had low selenium plasma levels but adequate selenoprotein P levels.

While it’s unlikely that poor selenium status explains a significant portion of the higher fracture rate in EPIC-Oxford, because selenium intakes can be low in vegan diets in some countries, it’s important that vegans in those countries ensure an adequate source (see Selenium).

Coming up in Part 4: